To objectify the benefits of PERN in the interest of promoting collaborative research and providing services that are at par with the developed world, PERN has been collaborating with international R&E networks through Trans Eurasia Information Network (TEIN) membership that further links and provide access to the global NREN consortiums like Internet2 (USA), CANARIE (Canada), CERNET (China), GEANT (Europe) and others. These linkages have provided collaborative opportunities to the researchers from all over Pakistan and connectivity with global REN`s. These TEIN linkages have yielded fruitful results in form of expediency along with features of security and elevated performance.

The most recent phase of the Trans Eurasia Information Network (TEIN) Project is Asi@Connect. Asi@Connect provides dedicated high-capacity internet connectivity for research and education communities across Asia-Pacific; operating at speeds of up to 10 Gbps, it currently interconnects universities and research centers in 23 countries/economies across the Asia Pacific region. It also connects to the 50 million European researchers and academics served by the GÉANT network and supports collaborative programmes in areas such as Earth observation, disaster warning, climate research, food security, delivery of e-health and e-learning.

Asi@Connect marks the 4th phase of EU funding to the Trans-Eurasia Information Network (TEIN)programme which was launched as an Asia-Europe Meeting (ASEM) initiative in 2001; it successfully established a regional research and education internet network (TEIN) from scratch in 2004 and progressively expanded its geographical footprint over the years. During this new phase, greater emphasis will be placed on delivering the project with increased involvement of additional partners within the Asia-Pacific R&E community. The project is jointly funded by the European Union and Asian partners and is managed by TEIN*CC (TEIN*Cooperation Center) based in Seoul, Korea. 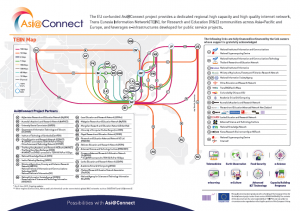 Communications technologies have radically transformed the healthcare industry in the Asian region with advanced remote diagnosis and enhanced international collaboration. TEIN assists trainee surgeons throughout Asia-Pacific to adopt complex clinical techniques, such as endoscopic surgery, by supporting interactive tele-surgical training. Advanced connectivity permits high-quality streaming of a live surgery event in near-real time from an operating theatre to a remote classroom. This facilitates the spread and scale-up of best practices, benefiting physicians and surgeons in developing countries and saving many precious lives.

Recent advances in medical technology require closer cooperation than ever between doctors and network engineers in hospitals. By offering good technical training and workshops for engineers in hospitals, patients will ultimately benefit from medical standardization with better healthcare services.

PERN has recently, commenced Telemedicine in the country and deployed video conferencing facility in the allied hospitals of Pakistan Institute of Engineering & Applied Science (PIEAS) for e-lectures and clinical activities for remote users/patients. 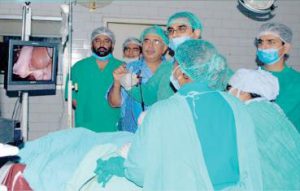 PERN further collaborated with HEJ (Hussain Ebrahim Jamal Research Institute of Chemistry), Karachi to hold the Telemedicine online Lecture under the VEPP (Virtual Education Project Pakistan).  Under this collaborative venture, PIEAS has submitted a completed course (series of lectures) to HEJ which is now approved for online delivery through VEPP.

This is the pilot project of Telemedicine in the country and executed in the area of Oncology. However, PERN is likely to expand this program and include other National / International Universities to fortify the collaborative research and deliver its services for the community at large.

Although TEIN was originally established as a gateway for collaboration among scientists and academic institutions, its advanced connectivity can also serve as a sound basis for fostering an entirely new way of collaborations in a wide variety of cultural projects – building bridges between different cultures. For instance, cyber-performance has become a reality, thanks to some sophisticated software, systematic co-ordination and through interconnected high-capacity information networks such as TEIN and GÉANT. Furthermore, e-Culture is already adopted across a wide range of cultural applications:

Recently, PERN has collaborated with TEIN and Prof. Boncheol Goo of Next Inc., South Korea on the project of establishing a tech-culture fusion platform for the beneficiary countries. The idea of the project was to conduct live one-way and two-way cyber performances over TEIN high speed network so that each country can represent culture through music and dance performance. From Pakistan, Center for Excellence in Arts and Design (CEAD), Mehran University of Engineering & Technology (MUET), Jamshoro has participated in the live cyber performance. The first live cyber performance under this project took place in December 2017, in Vietnam and participating countries included Pakistan, India and Bangladesh. The countries broadcasted their performance through the TEIN R&D link whereas the main venue was VinaREN, Vietnam. As part of the project, the second upscale cyber performance took place during APAN 47 in Daejeon, Korea. The programme titled: “dQ19 (dancingQ19) Dancing on Cyber Cloud” included Pakistan, Nepal, Bangladesh, South Korea, India, Malaysia and Vietnam. Dr. Bhai Khan Shar (Director CEAD Jamshoro) and his team collaborated with PERN and collaborating NRENs to make the cyber performance successful. The performance was also made available at the Higher Education TV channel edutv.hec.gov.pk. 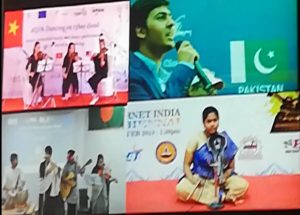 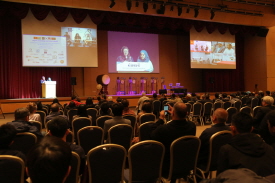 Dedicated high-capacity networks to serve research and education communities, such as TEIN in Asia-Pacific, are essential to underpin global collaboration among scientists and researchers, enabling the sharing of petabytes of data created during scientific experiments, and allowing physicists to work together, regardless of their location. TEIN facilitates collaborative research in a diverse range of subjects in natural science: Particle Physics like as Large Hadron Collider (LHC), Nuclear Fusion Science (NIFS), Crystal structures, Computational lenses, and Grid computing

PERN and its member universities alliance with CERN

The Experimental High Energy Physics department at National Center for Physics, Pakistan is playing an active role in the CMS experiment at the LHC and collaborating in hardware projects and physics analysis of CMS data. Members of this department have been actively involved in the search for Higgs boson which was discovered by the CMS and ATLAS experiments at CERN in 2012. The large amount of data produced by the LHC has been managed by NCP in real time through Worldwide LHC Computing Grid (WLCG) through the R&E connectivity of TEIN extended by PERN to NCP. NCP is a partner of CERN in this project and it is the only WLCG node in Pakistan. 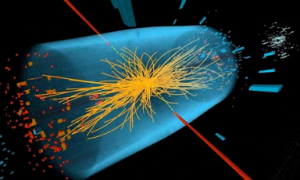 The Identity & Access Management helps in interconnecting identity federations around the world, simplifying access to content, services and resources for the global research and education community. Edugain, an initiative of GEANT provides an efficient, flexible way for participating federations, and their affiliated users and services, to interconnect. eduGAIN is a global service where more than 68 federations are participating with more than 2,600 identity providers and 1,800 service providers. PERN has also became the member of edugain and deployed its own identity federation (PKIFED).

EduGAIN will enable the universities to easily support access to services globally – allowing control over user management. It will further help students, researchers and educators access online services while minimizing the number of accounts users have to manage – reducing costs, complexity and security risks.

The Pakistan Education & Research Network spearheading technology based educational transformation has also deployed Education Television (EduTV) to uplift the standard of higher education culture. PERN has been successful in interconnecting studios of the PERN member universities with PERN video conferencing and the platform has been made available through edutv.hec.gov.pk. In this regards, various MoUs with collaborating Media Sciences universities have been signed for promotion of collaboration, research and education through this platform.

PERN is also working with peers in Asia Pacific Advanced Network (APAN) to collaborate and establish APAN/ TEIN TV Channel that will serve as a platform for knowledge sharing, cultural collaboration and a unified told for the Media Sciences Universities of the Asia Pacific.